Written by Max Friedman
Updated over a week ago

Why is friendly competition important? 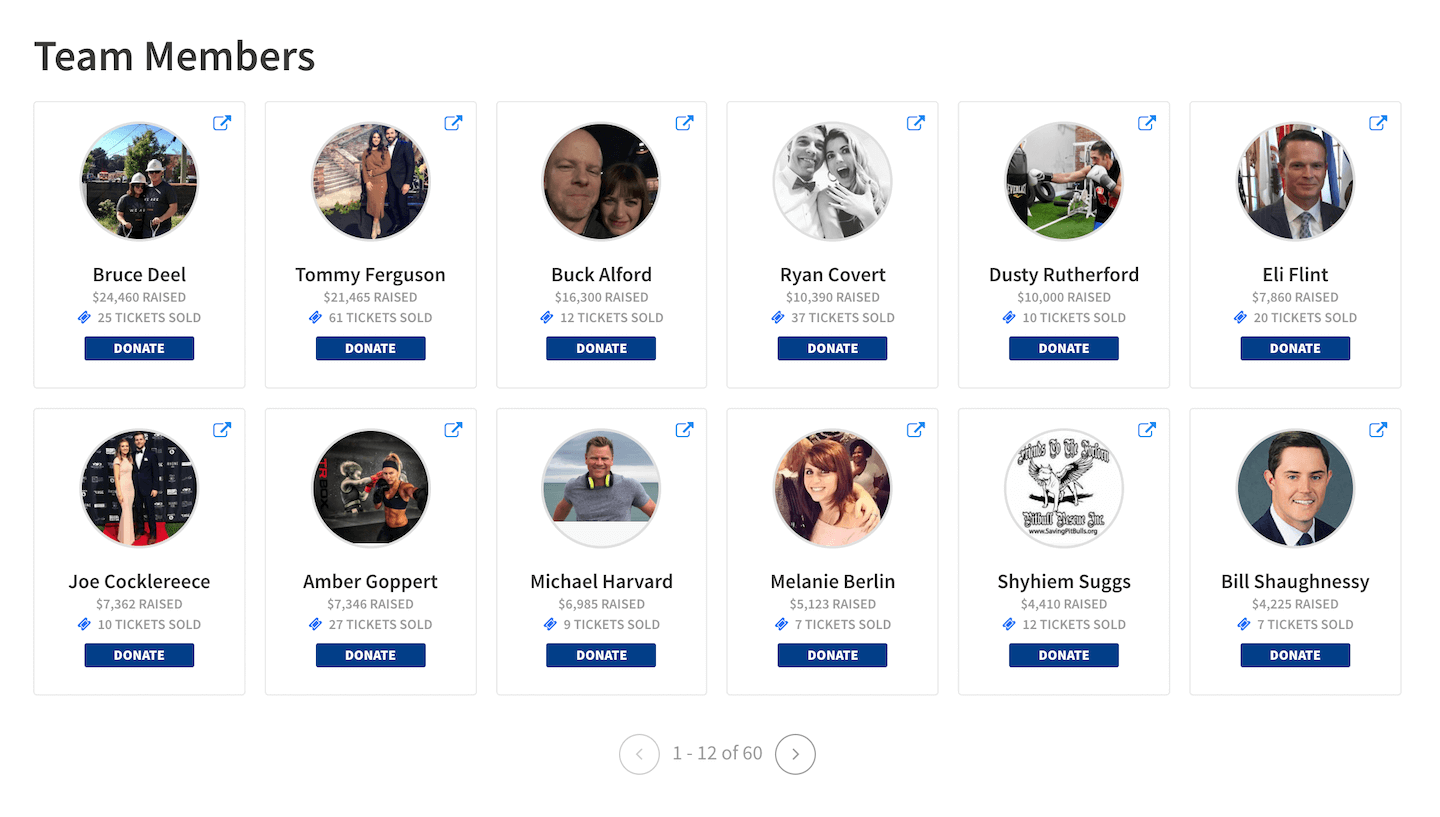 As mentioned in our fundraising success guide, we already know that the number one reason why people donate is because someone they know personally asked them to.

Therefore, it only makes sense that we'd want to motivate people as much as possible to make direct asks of their network. And that is exactly why friendly competition can play a pivotal role in the success of your fundraising efforts.

Let's think about it logically:

Scenario 1: You are among a group of friends supporting a cause, and no one knows how much anyone is donating, if they even have, or how many donations they've helped raise.

Scenario 2: You are among a group of friends supporting a cause, and everyone knows how much the others are donating (unless they choose to remain anonymous), and how many donations they've helped raise.

For each scenario, how much time/effort/money are you likely are you to give?

The benefits of Scenario 2 are overwhelming:

As a quick sidenote, if you are concerned about friendly competition being unfair (considering people's capacity for donating and raising money may differ based on many circumstantial factors), there are several ways to level the playing field. One thing we do at Givebutter with our leaderboards is we factor in not only how many dollars you've raised, but the number of donors you've gotten as well (# donors * $ raised = leaderboard score). So someone who raises $1,000 from 2 donors would be ranked the same as someone who raises $200 from 10 donors. This way, the "competition" is not just about how many dollars someone raises but their involvement and awareness generated as well.

How can I incorporate friendly competition into my fundraising efforts? 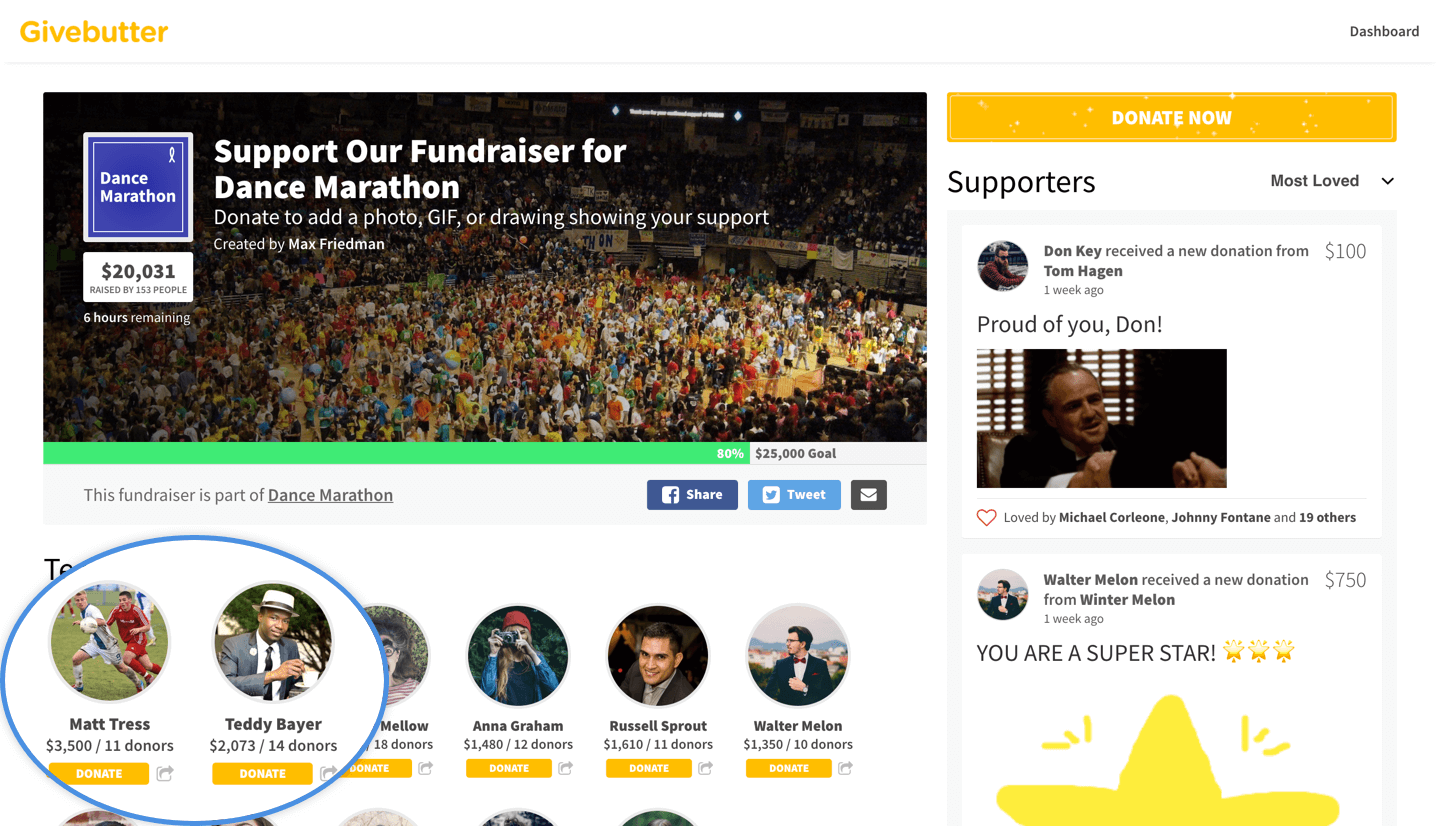 When people think about collecting donations and raising money, the first thing they'll often do is try to find a way to make the entire experience as simple as possible, for both the people fundraising and any potential donors. This is a mistake.

While simplicity is generally a good thing, when it comes to fundraising, it's also critically important to make sure participants have some sort skin in the game. And as we've already established, a healthy dose of friendly competition can make all the difference — making the few extra steps more than worth it.

There are two primary ways to incorporate friendly competition, regardless of the organization type or fundraising format: 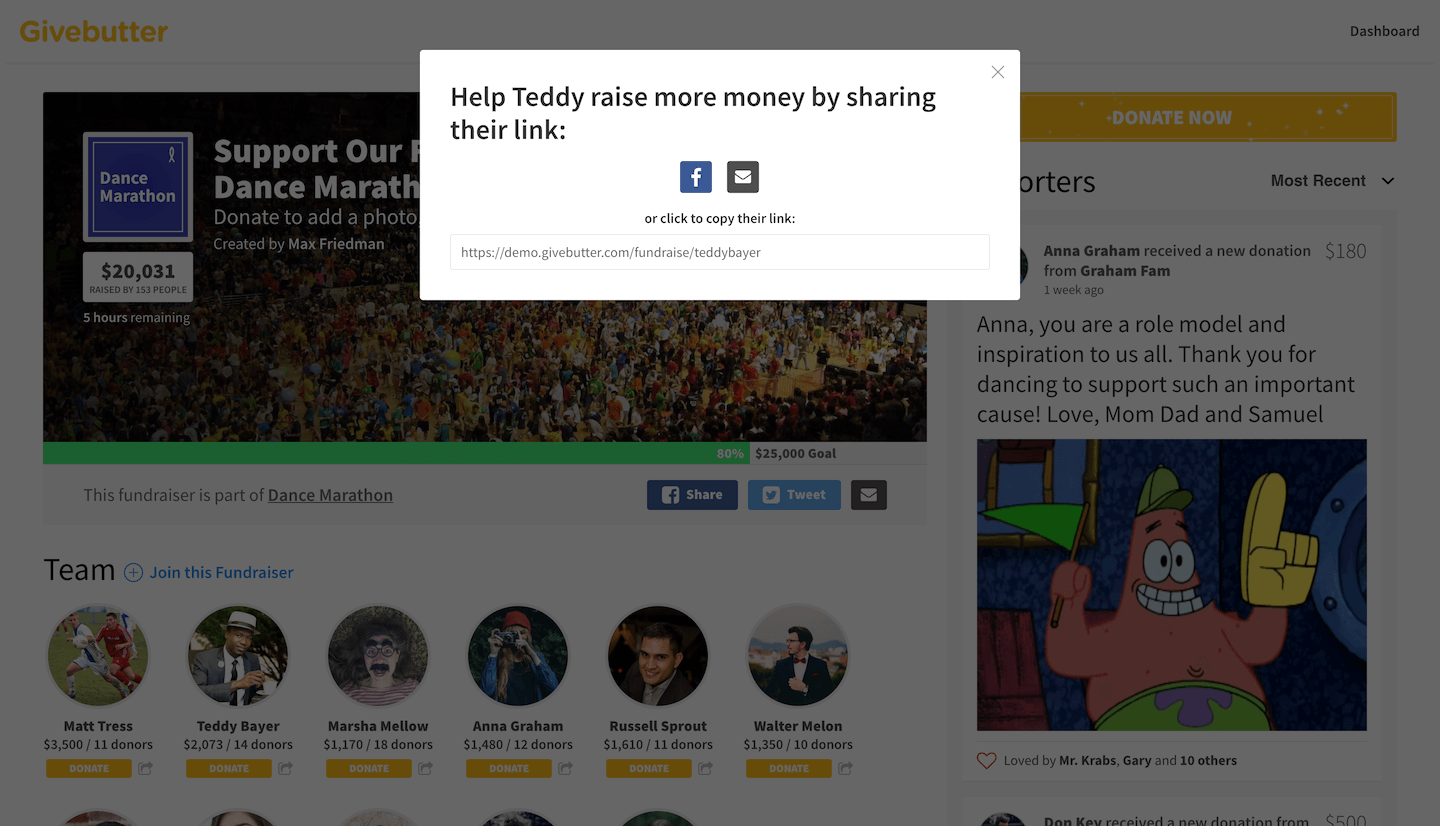 Once you've established the parameters for your peer-to-peer and/or multi-team fundraising campaign, there are many different ways to motivate participants:

Online fundraising platforms like Givebutter can also help motivate participants by enabling you to do the following:

Examples of friendly competition in action:

We as humans are motivated by social signals. The clothes we wear, the things we buy, and the places we go are all intrinsically motivated, at least on some level, friendly competition. Raising money is no different!

Yet, there are many people who would say that deriving a social benefit from charitable giving is wrong, or at least not their motivating factor. We hear you. However, time and time again we have seen a healthy dose friendly competition result in some of the most successful fundraising campaigns on Givebutter, and in the world. So if more money is raised for good causes, and people can feel more invested in those causes that they're supporting as a result, well - we think that's a win-win.

Ready to foster some friendly fundraising competition?
Get started with Givebutter

Did this answer your question?