Written by Alyssa
Updated over a week ago

My outbound SMS draft is displaying zero Contacts, excluding my Contacts, or my Contacts are all unsubscribed!

If you're creating a new SMS message in Engage, but your contacts are excluded, this may be because the Contacts are unsubscribed. Even if a phone number is listed, when a Contact is unsubscribed, no SMS messages will be sent to them.

To bulk subscribe your existing Contacts (don’t worry, you don’t have to redo or archive everything!), head to your Contacts page, select the Contacts you’d like to subscribe to Engage, click the Actions menu on the left, then select Manage Engage Subscriptions.

✅ Pro-Tip: You can bulk select Contacts by clicking the small checkbox ☑️ at the top of your Contact list if you want to subscribe everyone on that page.

A window will pop up where you can bulk subscribe your Contacts: 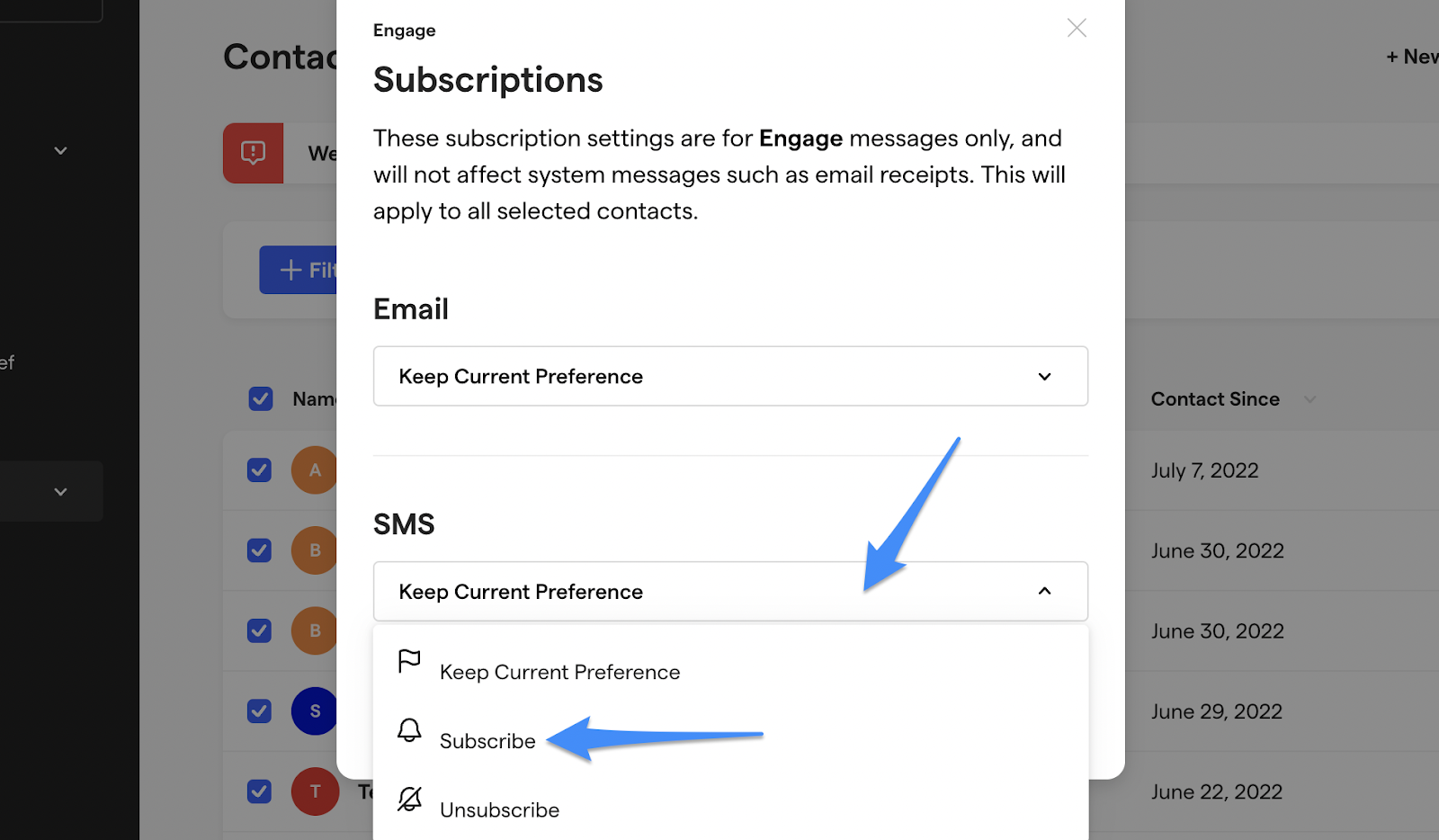 Alternatively, if you have pages and pages of Contacts that need to be subscribed that were previously imported into Givebutter - you can use the import spreadsheet you used to add them to Givebutter to bulk subscribe them.

After this, you should be able to create a new Engage SMS draft, without your Contacts being unsubscribed. 🙌

Text messages being received in multiple messages and in random order

If you've sent out a text blast that is supposed to be one message, but it breaks into multiple messages that are in random order, it's possible the receiver's cellular carrier does not support SMS concatenation.

SMS is limited to a certain number of characters. When your message only contains plain text, the character limit is 160. But when your message includes special characters, paragraph breaks, or emojis, the limit is only 70. If the text message surpasses those limits, it will break the message into multiple text messages unless the cell phone carrier supports SMS concatenation.

Concatenation means keeping SMS messages over the character limit (160 or 70) as one large message instead of breaking them into multiple messages.

Once a message is broken out into multiple text messages, the order of the messages (whether they come in the order they were written or not) is uncontrollable and not preserved, so these messages that are broken out are received in an unpredictable order.

In this situation, we would suggest keeping your outbound text blasts to under 70 characters, and preferably plain text (without special characters or emojis.) This will enable your SMS messages to be delivered as a single text message rather than multiple randomized messages.

Getting Started with Engage

How to interpret outbound message statistics

Did this answer your question?